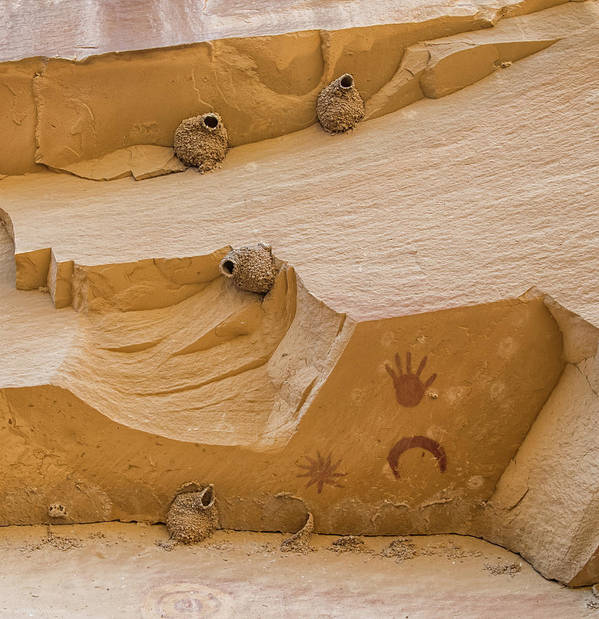 Rolled in a Tube

Supernova Pictograph II poster by Britt Runyon.   Our posters are produced on acid-free papers using archival inks to guarantee that they last a lifetime without fading or loss of color. All posters include a 1" white border around the image to allow for future framing and matting, if desired.

A close look at the Supernova Pictograph in Chaco Canyon, New Mexico. ... more

Nice capture of this magical spot.

The New Mexico Land of Enchantment Group is honored that you chose to submit your work to the group and we are proud to feature your magnificent image on the Homepage in the Featured Images.

A close look at the Supernova Pictograph in Chaco Canyon, New Mexico. Painted on the bottom of a small overhang there are three simple designs, a life-sized hand, a ten-pointed star and a crescent moon. The ten-pointed star is claimed to be a representation of a supernova known to have occurred in c.e. 1054. Chaco Culture National Historical Park is located in the northwestern part of New Mexico. Chaco has the most exceptional concentration of pueblos in the American Southwest. Hiking up stream in Chaco Canyon you come to the Supernova pictograph high upon the vertical sandstone cliff that forms the side of the canyon.

I am a New Mexico based Adventure Riding/Rafting/SCUBA Outdoor Digital Photographer, always on the qui vive for what Nature and humans provide. Capturing an image in my camera is but the first step in an artistic process. That initial bit of information then can pass through countless permutations before being declared complete. The journey from capture to completion is a lawless territory.