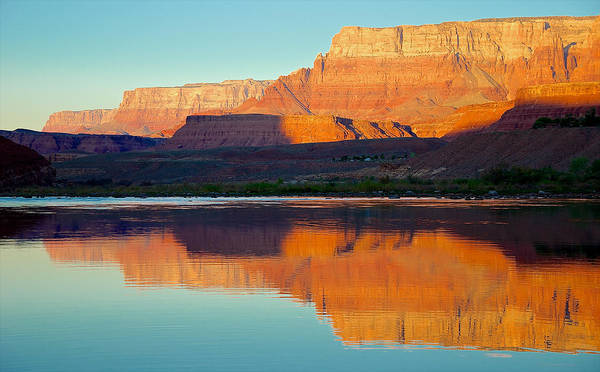 Rolled in a Tube

Lee's Ferry poster by Britt Runyon.   Our posters are produced on acid-free papers using archival inks to guarantee that they last a lifetime without fading or loss of color. All posters include a 1" white border around the image to allow for future framing and matting, if desired.

This is where it all starts. Due to its unique geography – the only place in hundreds of miles from which one can easily access the Colorado River –... more

Congratulations, on your FEATURE in Natural Scenic Landscape Photography, F

This is where it all starts. Due to its unique geography – the only place in hundreds of miles from which one can easily access the Colorado River – it historically served as an important river crossing and starting in the mid-1800s was the site of a ferry operated by John Doyle Lee, for whom it is named. The Grand Canyon is a steep-sided canyon carved by the Colorado River in the United States in the state of Arizona. It is contained within and managed by Grand Canyon National Park, the Hualapai Tribal Nation, and the Havasupai Tribe. President Theodore Roosevelt was a major proponent of preservation of the Grand Canyon area, and visited it on numerous occasions to hunt and enjoy the scenery. It is considered one of the Seven Natural Wonders of the World.

I am a New Mexico based Adventure Riding/Rafting/SCUBA Outdoor Digital Photographer, always on the qui vive for what Nature and humans provide. Capturing an image in my camera is but the first step in an artistic process. That initial bit of information then can pass through countless permutations before being declared complete. The journey from capture to completion is a lawless territory.